I've been trying to get a good, portable 3cm system set up for some time.  Some time last year I obtained an absolutely lovely pair of pan-and-tilt heads designed for miltary use with very long focal length spotting scopes. Mounted on a surveying tripod, these will be ideal for microwave dishes for portable use. 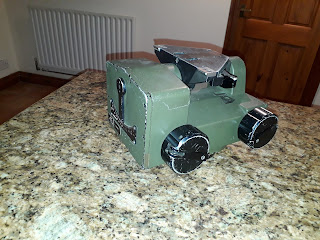 I also picked up a very nice 600mm dish, brand new and in 3mm aluminium, this is a precision spun communications dish; from a now defunct company in Leominster. I also had a very nice "shepherds crook" feed that had originally come with another dish many years ago. A bit of measurement suggested the focal length would be spot on. 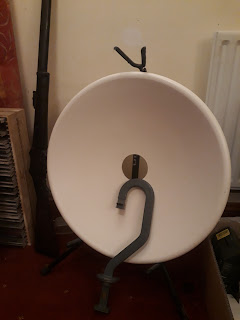 A bit of work on the lathe would be needed to produce a suitable mounting boss for the feed, so a lump of aluminium was purchased and I set to. I think it came out OK; turning the curve into the mating surface was the hard part. 6 holes were drilled and countersunk and the feed now fits very nicely in the dish centre. 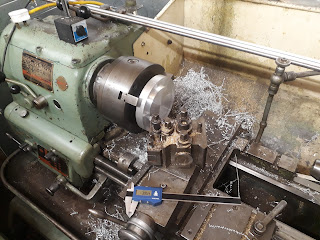 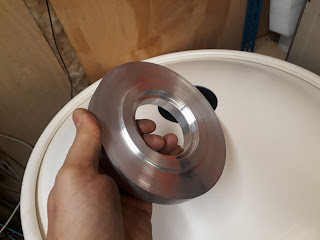 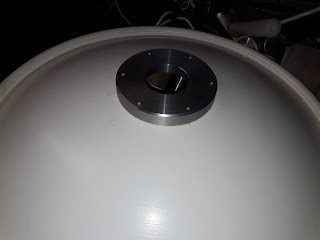 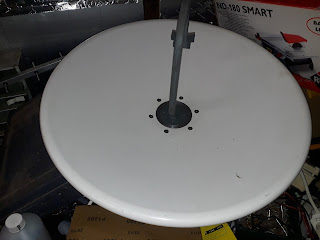 Next up was to make some sort of "L Bracket" to fix the dish to the pan-and-tilt head. Just before Christmas I was lucky enough to pick up a small CNC mill. It needed a little configuration and fiddling to get it working and Christmas gave me a little time to work on that.

The pan-and-tilt unit has a rather nice quick release mechanism on the top, but it is a rather complex shape. 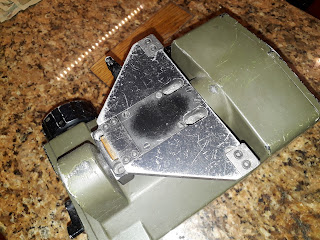 I drew up the basics of a mounting plate in Cut2D, ready to machine a suitable pocket into a nice thick bit of aluminium plate. The idea is to make a few of these, mounted onto the various bits of microwave kit, so they can be swapped easily when out in the field. 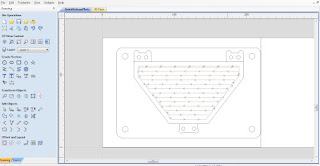 This week, I managed to make my first cuts with the machine, and the first job was to start on a mounting bracket for the dish. A bought a bit of 12mm x 150mm aluminium bar, clamped it down, loaded the code from Cut2D into the mill control software ... pressed "run" and hoped for the best. 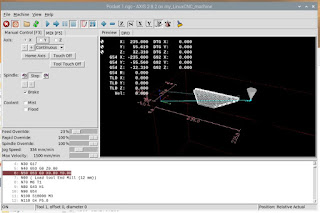 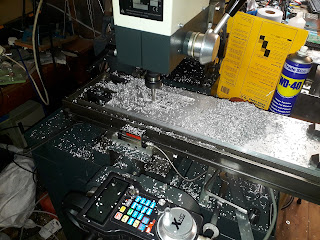 This seemed to go pretty well;  I kept feeds and speeds low for a first attempt and it seemed to cut quite smoothly with no chatter. Chips of course went everywhere. I suspect I will be building a full surround for the machine in the near future! 3 passes of 2mm depth were programmed into Cut2D, and the mill executed the programme perfectly. 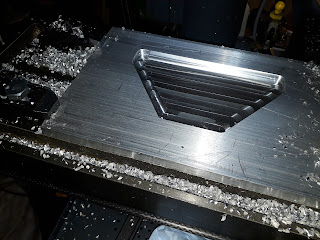 The finished result looked pretty good.  More needs to be done, but it should just be a question of  adding the cuttting operations to Cut2D, exporting the code to the mill and pressing run ... sadly it was 1am and time to close the shed for the night, but I am keen now to press on and get this project moving.
links:
Linux CNC, great (and free!) control software for mills, routers, plasma cutters etc http://linuxcnc.org/

Popular posts from this blog

KST2YOU - An alternative interface to KST 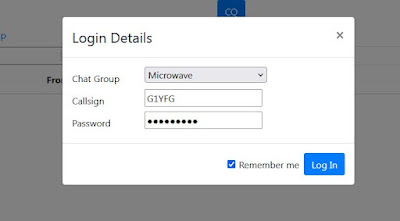 If any of you use KST and want to try a slightly (hopefully) more friendly user interface, I have published one here: https://kst2you.bss.design/   Amongst the design requirements were that it should run from a phone or tablet, as I really can't be doing with dragging a laptop around for portable trips for microwave stuff. It all runs in a web browser, and obviously on any desktop with a web browser.   If you already have an account on KST, you can just log straight in, you usual username and password will work.   The message interface is familiar to you if you have used KST, however I've tried to fix a few of the oddities of the traditional KST interface. One of the problems in a busy contest day is if you are trying to organize contacts say in the north of England and have range of at most 300km, you probably don't need to see messages from stations chatting in Italy.  The "filter by distance" option allows you to ignore chat from stations beyond a certain di
Read more 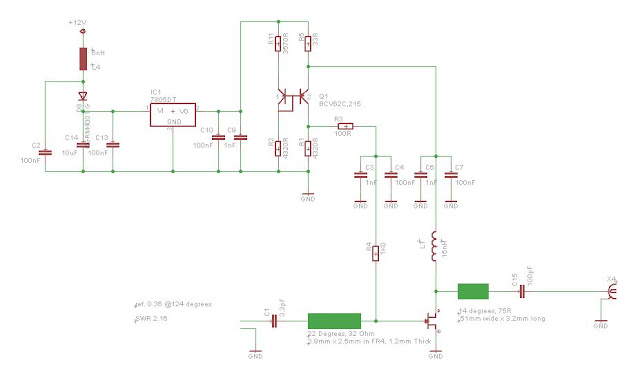 When I did my electronics degree, all those years ago, I wasn't really paying much attention to RF design, so I've had to learn a lot of this from scratch, as I failed to pay sufficient attention way back then. I thought I would have a go at building an LNA for the 13cm band as I had a transverter that didn't really seem to perform as well as I wanted. 13cm/2320MHz is high enough to be interesting for design, yet should still be accessible with FR4 substrate for the circuit boards. Certainly, for higher bands, PTFE substrates are becoming more appropriate, but 13cm should still allow FR4, and as my initial attempts are likely to be needing fine tuning, FR4 is a much more "experimenter friendly" choice. There are essentially 3 parts to the design and evaluation process:            The basic schematic with the bias circuitry.          The RF design          Performance evaluation. The basic schematic and bias  scheme were as a result of my choice of active device f
Read more